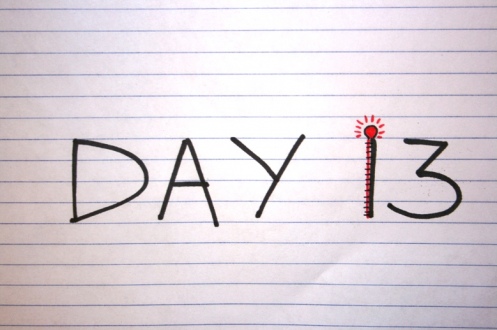 We’re nearing on the halfway mark of NaNo now! I’m so excited!

I know what you’re thinking: This post is a couple days early. I know, I agree. But I’m nearly to 25k words, so I think it’s a good time to bring it up!

Tonight my word count is resting at 24k, after being left unchanged for a couple days.

It was a bit saddening to see that my word count stayed the same for more than one day, but I had a good excuse. I spent Saturday evening at a concert for my favourite band; it’s their last tour, and their only show in my area for over ten years, so I had to go. I’ve always wanted to see them live, and I’m so happy I saw them.

As for Sunday, I took the time to spend with my family and put up our Christmas tree a bit early. It’s not decorated yet, but the kids are begging to do that so I’m sure it’ll happen soon. I love Christmas time, so it’s not a big deal to have the tree up a few weeks early. 🙂

Tomorrow I will be hitting and passing 25k; my goal for tomorrow is 26k. I plan on getting ahead of the minimum count again so I can take Thanksgiving off without worrying about falling behind. I had been three days ahead, but now I’m only one. But that’s okay.

In a side note, a new story idea has been birthed in the back of my head. It’s a pretty demanding idea, so I’m hoping it’ll let me be so I can finish Stranded Moon. Here’s to hoping!

How is your NaNo going? What’s your word count?

Currently living in Southeastern Michigan, Eliza is a writer of young adult fiction and active Girl Scout Mom to her twin daughters, L and R. She is married and has a 15 year old black lab named Sammy. View all posts by Eliza Szelag

1 thought on “NaNoWriMo- The Halfway Mark”